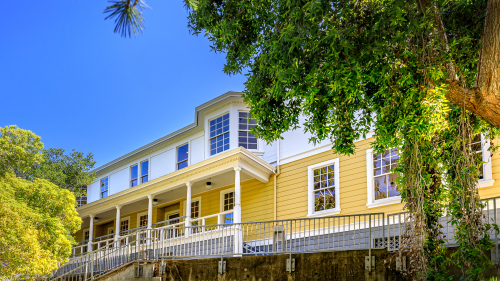 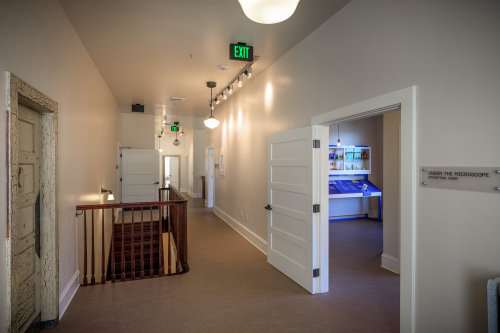 The 10,000 sf Hospital, constructed c.1908, represents a major part of the immigrant experience for those entering the United States on the West Coast. The Program Document and updated HSR, guided the team of preservation architect, civil, structural, mechanical, electrical, and plumbing engineers, and cost estimator to develop an overall rehabilitation design. The mix of funding sources and timing of funding required phasing of construction and the installation of the museum and interpretive elements. 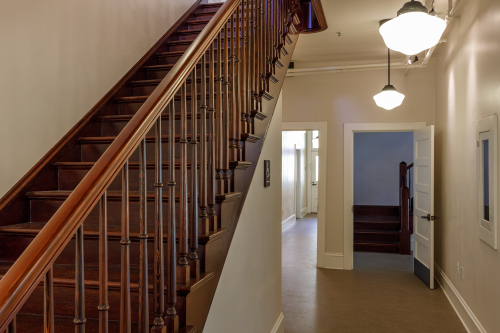 A few of my projects didn't get shared here in a timely way because of that C-19 thing. But here is a HISTORIC AMERICAN BUILDINGS SURVEY project that was really interesting and only about 50 years old. I did the forty-four, 4x5 large format HABS photographs in April 2019, and the report and captions are now up on the Library of Congress HABS website, but alas, the photographic scans will probably not be digitized for years. I have a few photos here but I have placed the entire set of black and white, large format HABS photographs up on my Adobe Behance Portfolio page so you can scroll through them in order, or look at them as a full-screen photo grid. 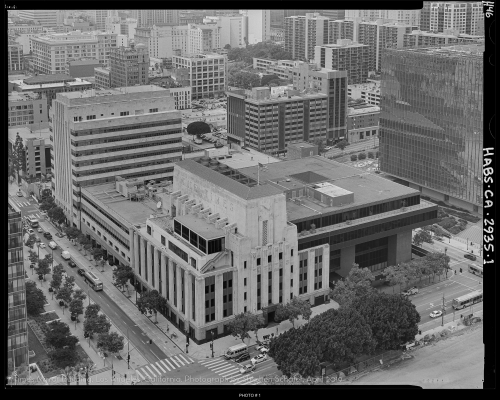 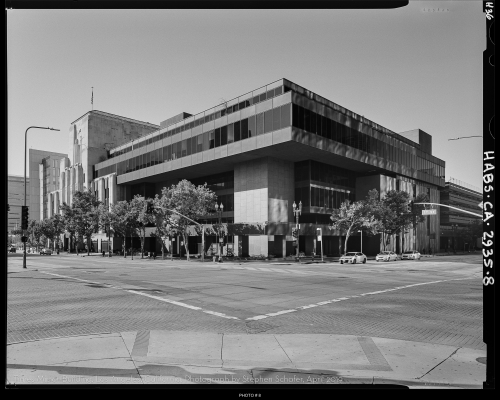 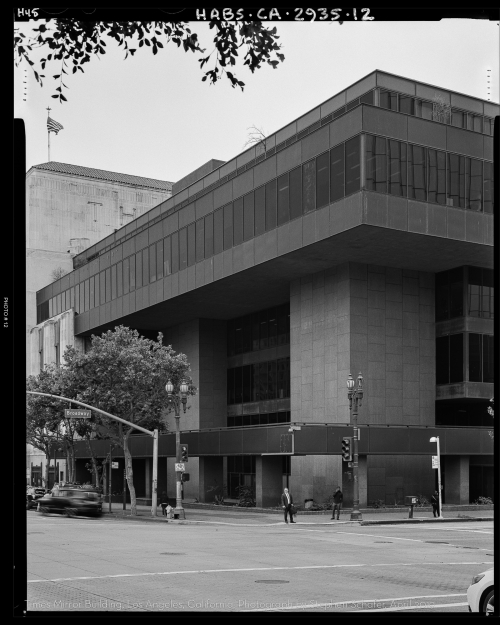 The building is also significant for its association with Otis Chandler. Chandler served as the publisher for the Los Angeles Times between 1960 and 1980 and has been recognized as one of the most important newspaper publishers in the United States. He kept an office on the sixth floor of the Times Mirror Building from 1973 until he was ousted as the chairman of the Times Mirror Company in 1986. 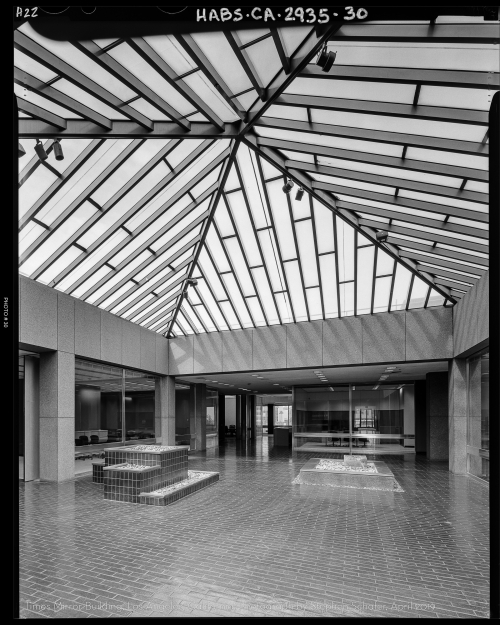 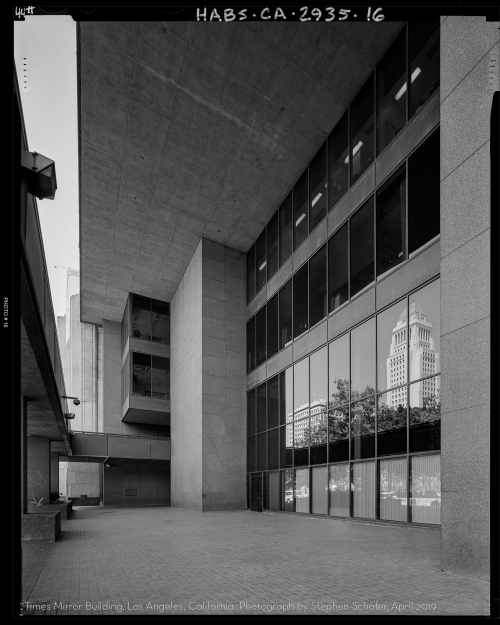 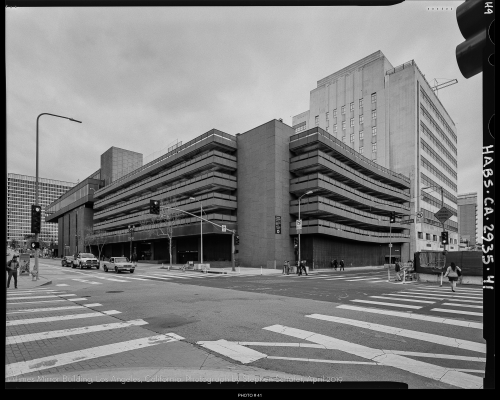 The Parking Structure was not identified as individually eligible for listing in the National Register or the California Register because it is a purely functional building and is not directly associated with the activities of the Times Mirror Company or Chandler; however, it is within the boundaries of the historic district comprising buildings associated with the Times Mirror Company...

Entire HABS CA-2935 captions, maps and report can be found at: https://tile.loc.gov/storage-services/master/pnp/habshaer/ca/ca4300/ca4382/data/ca4382data.pdf

For more information take a look at the
Frequently Asked Questions
section of our website if you’d like more information about HABS/HAER/HALS
www.HABS.photo
Stephen Schafer, Photographer
Ventura, California
805-652-1000
schaf@west.net 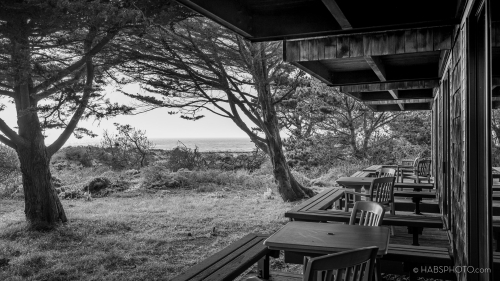 Asilomar Conference Grounds Warnecke Historic District is located at the western edge of the City of Pacific Grove, overlooking Asilomar State Beach. The district consists of twenty-two buildings and associated landscape features designed by John Carl Warnecke & Associates after the State of California acquired the property in 1956. Originally a Young Women’s Christian Association (YWCA) camp designed by Julia Morgan, Asilomar’s initial stage of development was between 1913 and 1928, which was designated Asilomar Conference Grounds Historic District National Historic Landmark (NHL) in 1987. The resulting distinct architectural context and 1957 to 1968 period of significance permit a new standalone nomination rather than amending the earlier nomination with additional documentation. 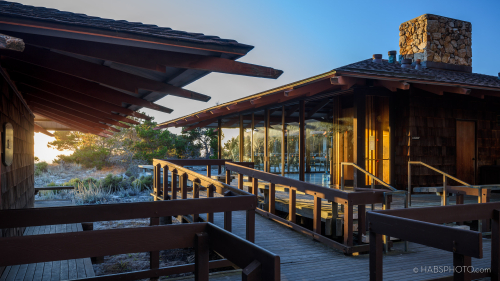 Master architect John Carl Warnecke’s Asilomar design embodies distinctive characteristics of Second Bay Tradition architecture, a movement distinctively tied to both the time and place. The master plan for the site, which he developed in concert with landscape architect Michael Painter, exhibits dual harmony with both the natural environment and Asilomar’s older buildings. The district is an exceptional example of the contextualism that became a defining feature of Warnecke’s early career. 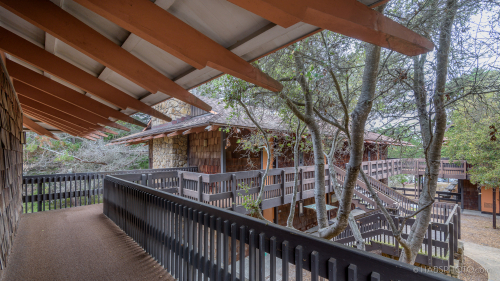 In Warnecke’s Master Plan, he expressed the importance that new buildings do not mar “the easy relationship of buildings to land.” Warnecke’s Master Plan called for a series of small complexes with a combination of lodging and conference buildings, which would nestle within Morgan’s site plan without making it crowded and serve as contained conference centers. At Asilomar, the work of fitting into the existing environment was twofold, as Warnecke aimed for harmony with both the natural environment and the site’s existing Julia Morgan-designed buildings. 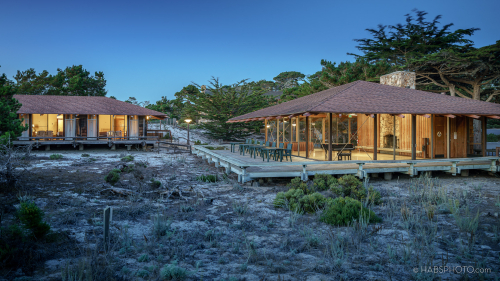 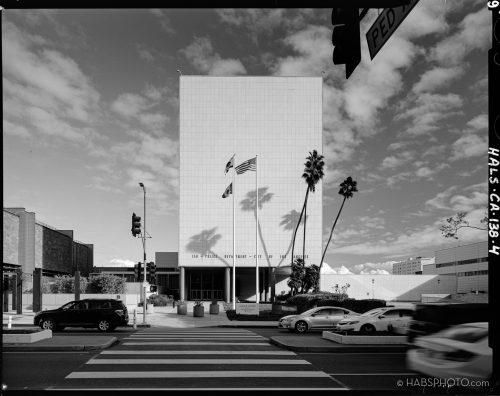 Look Back at early (2007) Google Street Views On Your Phone

Traveling back in time with Street View 🕰️ 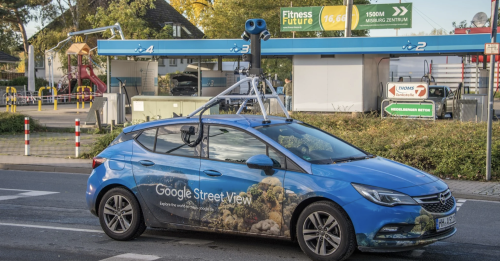 I'm using this all the time for preservation and HABS pre production scouting.
From the Google blog... Starting today on Android and iOS ... travel back in time right from your phone. Here’s how it works:
When you’re viewing Street View imagery of a place, tap anywhere on the photo to see information about the location. Then tap "See more dates" to see the historical imagery we’ve published of that place, dating back to when Street View launched in 2007.

I just uploaded a new video of the Landscape Photo educational webinar from Nov, 10, 2021. 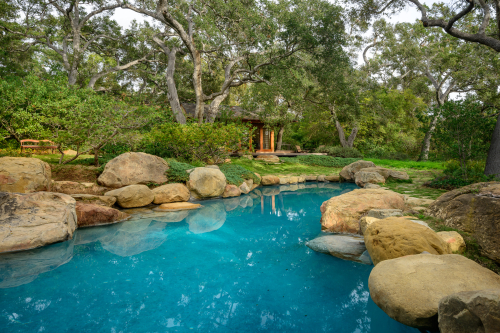 HALS Photography of the Lovelace Garden by Stephen D. Schafer. This Historic American Landscapes Survey project was featured in the video.

You never know when you volunteer for an online presentation, but I'm really pleased with how this webinar came out and that CPF made it freely available. And also really honored to be included in this short educational photography session sponsored by the California Preservation Foundation (californiapreservation.org) and the California Garden and Landscape History Society (cglhs.org). Photographer Millicent Harvey and I share our methods for photography in general, and landscape photography in particular, and since our approaches, techniques and clientele are so varied, the two presentations and lively Q&A show the diversity of our styles, and the range of creative approaches to photographing the landscape.

Millicent and I have been working as professional photographers for over 30 years, and we both clearly love what we do, but from start to finish our process is different (except when it's the same). It was a fun, spontaneous, presentation and an unscripted Q&A that should be educational for everyone  who wants to learn about what career photographers do. 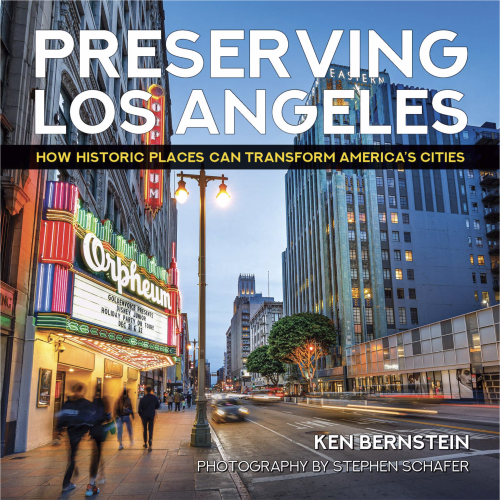 Ken Bernstein and Stephen Schafer, author and photographer of the Los Angeles Times bestselling book, Preserving Los Angeles, will be sharing an engaging visual tour of how historic preservation has helped transform Los Angeles, and can do the same for other cities.

Extending beyond well-known Midcentury Modern dwellings by renowned architects, Preserving Los Angeles highlights hidden Modernist gems that will surprise even longtime Angelenos, while showcasing the city’s rich and varied built heritage, from bungalow courts and roadside landmarks to modest structures that reflect the social and cultural history of the city’s diverse communities. 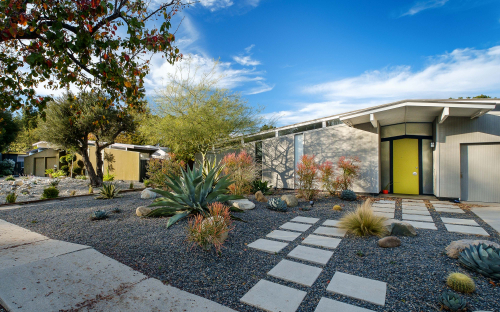 Los Angeles has become a testament to the power of adaptive reuse, repurposing historic structures to revitalize its Downtown, create new sources of affordable housing, and transform residential neighborhoods.

Preserving Los Angeles showcases every community in Los Angeles, reminding us that remarkable architecture and cultural history is all around us, often in unlikely places. The book is an authoritative chronicle of urban transformation, a guide for citizens and urban practitioners alike who hope to preserve the unique culture of their own cities. 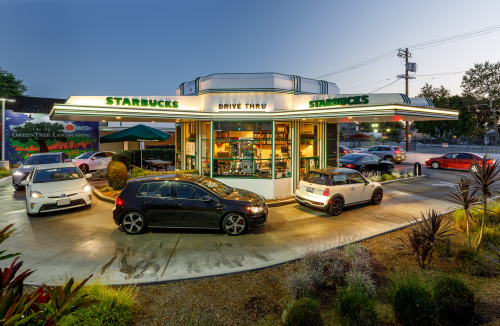 Stephen Schafer is an HABS* photographer with a preservation distraction, who crisscrosses America documenting historic buildings, landscapes and engineering.

*WHAT IS HABS PHOTOGRAPHY?
The Historic American Buildings Survey, Historic American Engineering Record and Historic American Landscapes Survey are US federal government programs administered by the Heritage Documentation Program Department of the National Park Service (abbreviated HABS/HAER/HALS). Photographic documentation for these programs meets the Secretary of the Interior’s Standards for Architectural, Engineering and Landscape Documentation (SIS Doc Standards). In short, these programs document the historic built environment and cultural landscapes in America and work with the Library of Congress Prints and Photographs division to archive the architectural plans, reports and photographs for the public in perpetuity. HABS, HAER and HALS are considered the gold standard of photographic documentation programs.

For more info to take a look at the Frequently Asked Questions section of our website if you’d like more information about HABS/HAER/HALS photography.

Using a camera to capture the beauty of a plant or place is just one aspect of photography. Capturing a historic landscape requires an intentional approach behind the camera, whether the goal is exhibition or documentation. Harvey and Schafer will share insights into their professional yet distinct practices and examples of their work at a free lunchtime talk on Wednesday, November 10th at noon. A Q&A with the photographers will follow the presentation.

Join me in November... 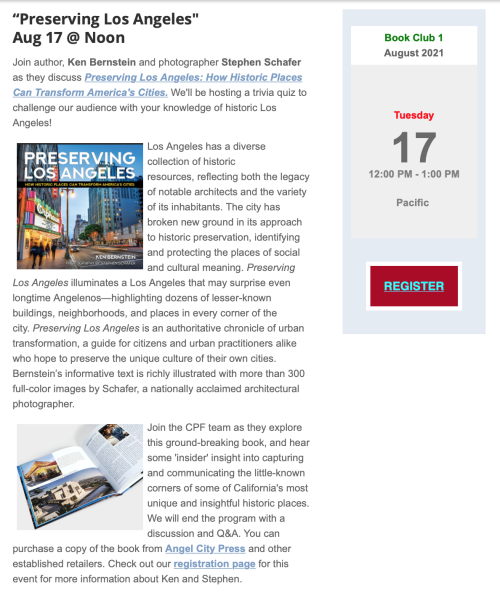 Los Angeles has a diverse collection of historic resources, reflecting both the legacy of notable architects and the variety of its inhabitants. The city has broken new ground in its approach to historic preservation, identifying and protecting the places of social and cultural meaning. Preserving Los Angeles illuminates a Los Angeles that may surprise even longtime Angelenos—highlighting dozens of lesser-known buildings, neighborhoods, and places in every corner of the city. Preserving Los Angeles is an authoritative chronicle of urban transformation, a guide for citizens and urban practitioners alike who hope to preserve the unique culture of their own cities. Bernstein’s informative text is richly illustrated with more than 300 full-color images by Schafer, a nationally acclaimed architectural photographer.

Join the CPF team as they explore this ground-breaking book, and hear some 'insider' insight into capturing and communicating the little-known corners of some of California's most unique and insightful historic places. We will end the program with a discussion and Q&A. You can purchase a copy of the book from Angel City Press and other established retailers. Check out our registration page for this event for more information about Ken and Stephen.

Mastering architecture photography is a complex yet rewarding process. Like people, buildings have their best side, and choosing your perspective, composition and camera placement for both interiors and exteriors will be a focus. In this workshop we will examine the intricate relationship between architectural design, natural light and the weather, and explain approaches to artificial and natural lighting...

LACP Architecture Photography Class October 17, 2021 (In the evening so we can do a HERO twilight photo in Culver City.)