Goldilocks and the 3 Shots... 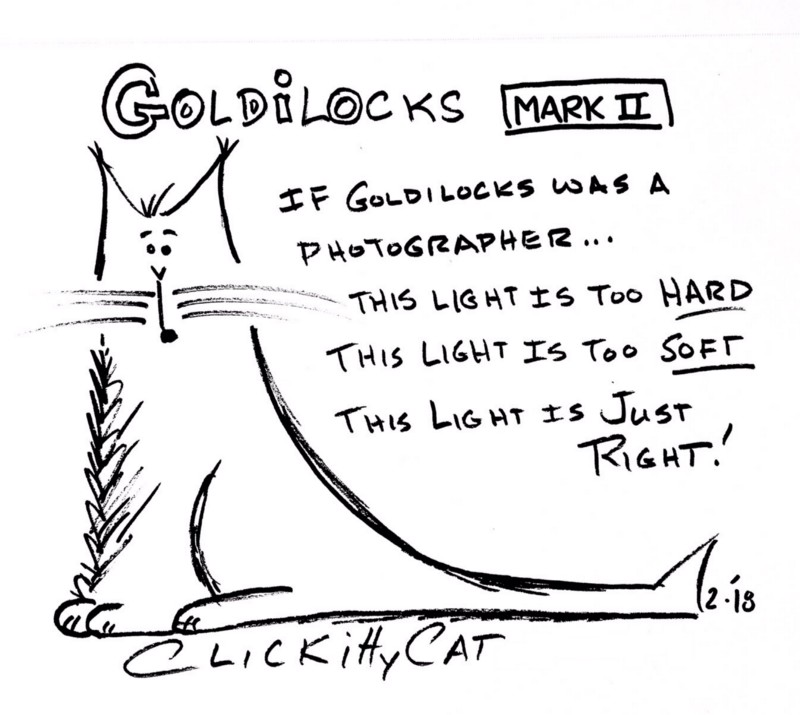 Once upon a time, there was an architectural photographer named Goldilocks.

She went to a job in the forest to take three shots for a local architect. Pretty soon, after Siri took her down a few dead ends, she came upon the house in the trees. She knocked and, when no one answered, she walked right in, because architectural photographers don’t have time to wait around while it’s light outside.

Once in the kitchen, she set up her tripod, camera and PC lens and then spent the next few minutes rising and shifting and focusing and zooming and peaking at 10X in live-view until she was satisfied with the composition.
She took a shot.

“This exposure is too hot!” she exclaimed.

So, she closed her aperture and added a polarizer to remove the glare from the countertop and took a second shot.

“Better, but now this photo is too cold,” she said.

So, she checked her color meter, and adjusted her white balance to 5200K and took a third frame.
“Ahhh, this photo is just right,” she said happily and spent the next hour going through the pantry and cupboards to find props to block the outlets in the backsplash, adjusting decor, adding some sliced kiwis on a cutting board, and setting the breakfast nook with three brightly colored bowls of porridge.
After she’d finished her bracketed exposures, gray card snaps and an LCC profile she took out her strobe and blasted the ceiling for a couple of underexposed window views to layer into Photoshop later. She lamented the annoying reflections on the stainless steel refrigerator but decided, “I'm losing light, I’ll fix them in post.” She put the props back where she found them  (generally), then, she moved into the living room where she saw three chairs.

Goldilocks composed a shot with the loveseat.

“This loveseat is too big!” she exclaimed.

So she moved the loveseat out of frame and pushed an overstuffed chair in from off-camera.

“This chair is too fat!” she whined.

So she backed up as far as she could, set the tripod into the corner and adjusted her focus and composition with her back pinned to the wall because she forgot to bring her WiFi tethering dongle thingy. The chair was still too prominent so she used some Ninja-Yoga moves to extract herself from the corner without bumping the tripod and she moved a mid-century modern lounge chair into the frame.

“Ahhh, this chair is just right,” she sighed.

Then she roamed the house for props, stacking books, dusting the coffee table, Karate-chopping throw pillows, combing the fringe on the Oriental rug, and building a quick-fire in the fireplace out of newspaper behind attractively stacked logs to layer in Photoshop later. But by the time she had the room propped, the clouds had parted and sent long fingers of sunlight across the room. “This contrast is impossible!” she moaned, “I’m going to need to break this exposure into pieces and do a FLAMBIENT bracket.”

Goldilocks was very tired after moving all the furniture in the living room (generally) back, but she still had to photograph one of the bedrooms. So she went upstairs to look at the first bedroom, but it was too hard — the closet blocked the view from the door, the ceiling was mauve, the walls were a combination of high-gloss paint and big mirrors and vertical blinds threw nuclear zebra-stripes of light across the bed.

Then she looked at the second bedroom, but it was too soft — the pink pastel walls and tungsten can-lights were at war with a window full of dense spruce trees, bathing the room in a shadowless blue-green backlight. It was a color crossover nightmare that would never look right no matter how many calibration gray card readings she took.

Then she went down to the third bedroom which Goldilocks hoped would be just right … almost. It was naturally lit from two sides and had a white ceiling to bounce off, but (as usual) the owner had not cleaned it and so Goldilocks had to make the bed and try to stretch the wrinkles out of the bedspread by gaff-taping it to the bedposts. She pulled all the brightly colored books out of the bookshelf and replaced them backwards with the pages facing out. She removed the tacky decor, the lava lamp and the personal photos from the nightstand and put them on the floor behind the bed (because she had learned that opening a nightstand drawer to hide something NEVER turned out well). She then roamed the house and found a classy desk lamp in the den to replace the odd lava lamp. After finding a vacuum cleaner on one of her prop runs, she exited the room backwards while vacuuming the nap in the carpet … twice, because she forgot to turn the desk lamp on the first time.

As she made her final exposures and underexposed the window views, the homeowners came home.

“Someone’s wrapped all the charging cables into neat little circles,” mused the Papa as he plugged in his phone.

“Someone’s straightened all the magnets on the fridge,” said the Mama as she refilled her insulated flask from the Britta pitcher.

“Someone’s been slicing kiwis … and they’re delicious,” said the 30-year-old son still living at home. Then they all walked into the living room.

“Someone’s been lining up all the remotes next to the TV by size,” mumbled the Papa.

“Someone’s been stacking the coffee table books by color,” said the Mama.

“Someone’s been building a fire and that’s not very environmentally sustainable,” whined the son.

They decided to look around some more upstairs where Papa bear grumbled, “Someone’s moved the lamp in the den.”

“Someone’s left the Hoover in the hall,” said the Mama.

“There’s a chick photographing in my bedroom and she’s vacuumed!” exclaimed the son … then he thought to himself, “I hope she didn’t look in my nightstand.”

Just then, Goldilocks heard the family and walked out to the hallway to introduce herself.

“You’ve got the wrong house,” laughed the Papa, “You want the Bearman’s house down the road.”
She screamed, “Oh, wow, I’m so embarrassed!” Then thinking on her feet she asked, “Can I interest you in a non-commercial rights license to some photos of your house?”

The comments to this entry are closed.