The book Preserving LA by Ken Bernstein (with photos by me) will be delivered to book stores in April 2021.  See below for the publisher's blurb and website to pre-order. 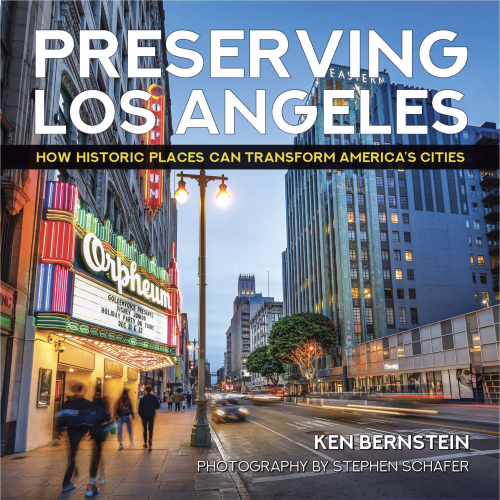 Los Angeles has developed one of the most successful historic preservation programs in the nation, culminating with the completion of the nation’s most ambitious citywide survey of historic resources. Across the city, historic preservation is now transforming Los Angeles, while also pointing the way for other cities to use preservation to revitalize their neighborhoods and build community. Preserving Los Angeles: How Historic Places Can Transform America's Cities, written by Ken Bernstein, who oversees Los Angeles’s Office of Historic Resources, tells this under-appreciated L.A. story: how historic preservation has revived neighborhoods, created a Downtown renaissance, and guided the future of the city. With more than 300 full-color images, Preserving Los Angeles is an authoritative chronicle of urban transformation, a guide for citizens and urban practitioners alike who hope to preserve the unique culture of their own cities.

Younger than many American cities, Los Angeles has a remarkable collection of architectural resources in all styles, reflecting the legacy of notable architects from the past 150 years. As one of the most diverse cities in the world, Los Angeles is breaking new ground in its approach to historic preservation, extending beyond the preservation of significant architecture, to identifying and protecting the places of social and cultural meaning to Los Angeles’s communities. Preserving Los Angelesilluminates a Los Angeles that will surprise even longtime Angelenos—highlighting dozens of lesser-known buildings, neighborhoods, and places in every corner of the city that have been “found” by SurveyLA, the first-ever city-wide survey of Los Angeles’s historic resources. The text is richly illustrated through images by a prominent architectural photographer, Stephen Schafer. The photography-heavy appendix devoted to SurveyLA, can serve as a field guide to hundreds of the city’s most notable locations.

This book will be published April 20, 2021. Order at Angel City Press: The book release was originally planned for late 2020 but some minor Covid-19 delays impacted my ability to travel freely into Los Angeles to take the more than 400 photographs of historic places and SurveyLA discoveries, but I have seen the proofs and the book looks pretty terrific, worth the wait and the extra trips to LA.

The comments to this entry are closed.